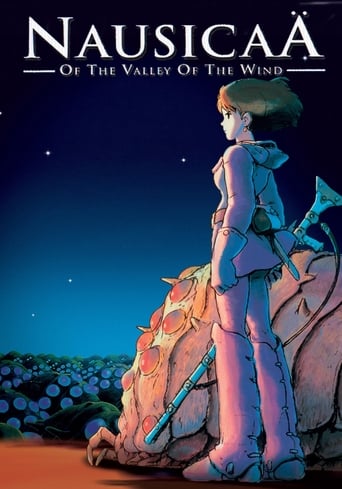 Lydia Dyslin 4 years ago
Lovely movie; one of my favorite anime films. Kudos to my cousin for showing it to me!

Noah Rymer over 4 years ago
it's not a popular opinion, but this is my favorite Miyazaki movie.

Leif Jacobson almost 5 years ago
Clearly an earlier effort by Miyazaki, that still puts it head and shoulders above a lot.

Gabi Dincă 5 years ago
I loved this one! I don't know why I waiting so long to watch it.

SpikeDaCruz over 5 years ago
It has his moments, but don't have the same magic of Hayao Miyazaki last masterpieces.

Zach Sly 6 years ago
One of the more impactful Miyazaki films, albeit somewhat dated in form. A must-see.

Pavlos Papadakis over 6 years ago
worth the watch

Simon Fenton over 6 years ago
Re-watched this and revised my scores right down. No real meat on its bones. War and war.

William Fenton almost 7 years ago
Quotidian Miyazaki but head and shoulders above most films.

Bryony Cameron almost 7 years ago
I kept hoping it would get better.

Robyn Hamilton almost 7 years ago
Not my favourite Ghibli, but anything from Miyazaki is worth watching.

Chelsea Foreman over 7 years ago
Exciting story. worth watching if you like Studio Ghibli films.

Randi Steers over 7 years ago
Not one of Miyazaki's better works, but still a Ghibli classic nonetheless. Stunning.

Daniel Popescu over 7 years ago
super

Michael Cole almost 8 years ago
Nobody can create fantastical settings like Miyazaki, and this movie is no exception.

Ko Ikegame over 8 years ago
I think it's the best film in Ghibli works though Original manga is much more spectacular.
Nausicaä of the Valley of the Wind (風の谷のナウシカ, Kaze no Tani no Naushika) is a 1984 Japanese animated post-apocalyptic fantasy adventure film written and directed by Hayao Miyazaki, based on his manga of the same name. The film stars the voices of Sumi Shimamoto, Goro Naya, Yoji Matsuda, Yoshiko Sakakibara and Iemasa Kayumi. The film tells the story of Nausicaä, a young princess of the Valley of the Wind who gets involved into a struggle with Tolmekia, a kingdom who tries to use an ancient weapon to fend off the Ohms. Nausicaä must stop the Tolmekians from killing these insects. The film was released in Japan on March 4, 1984 and was presented by the World Wide Fund for Nature. While created before Studio Ghibli was founded, the film is considered to be the beginning of the studio, and is often included as part of the Studio's works, including the Studio Ghibli Collection DVDs. Among its numerous awards, it won the Animage Anime Grand Prix prize in 1984. One thousand years after the ...
Read more on