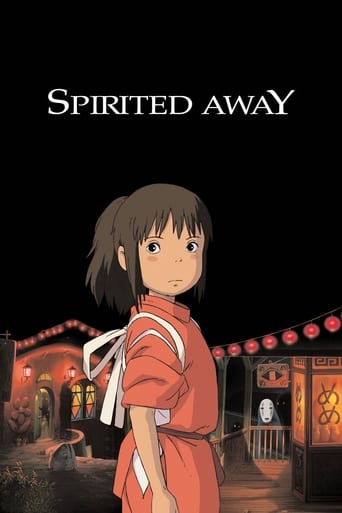 N B almost 2 years ago
Appreciated the animation but not the plot. Didn't get what's so great about it in a whole

Mahri Skulls over 3 years ago
What's not to love about this movie? Great piece of art, believable characters, touching

Amanda Mathews over 3 years ago
Miyazaki doing what he does best. This film is genius.

Rachel Marshall almost 4 years ago
Probably the best animated film of all time; it excels in story, art and music. Beautiful.

Claudia González 4 years ago
One of the sweetest, best directed and animated movies.

Phetcharat over 4 years ago
Excellent!

Earnshaw Jean Louise over 4 years ago
I want my fucking dragon boyfriend.

Sophie Alvelda over 4 years ago
This is definitely in my list of favorite Hayao Miyazaki movies!

Miles Ross over 4 years ago
Beautiful, emotional, spiritual. Hard not to love.

Zoe Sak over 4 years ago
YOU HAVE TO SEE THIS MOVIE REGARDLESS OF WHAT YOU THINK!

Michelle Huang 5 years ago
Great animation, but it was just too weird for me even after reading wikipedia and reviews

Brandon Keck 5 years ago
This was good, but didn't live up to the hype.

Mark 5 years ago
Slow start, but stick with it as it gets a lot better.

Daniel Jones over 5 years ago
What is this weird movie and why is it so enthralling? Top notch animation, as well.

Dónal Kennedy over 5 years ago
An astounding marriage of vision and craft. Miyazaki's world enchants.
Spirited Away (千と千尋の神隠し, Sen to Chihiro no Kamikakushi, lit. "The Mysterious Disappearance of Sen and Chihiro") is a 2001 Japanese animated fantasy-adventure film written and directed by Hayao Miyazaki and produced by Studio Ghibli. The film tells the story of Chihiro Ogino, a sullen ten-year-old girl who, while moving to a new neighborhood and after her parents are transformed into pigs by the witch Yubaba, becomes trapped in an alternate reality that is inhabited by spirits and monsters. Chihiro takes a job working in Yubaba's bathhouse to find a way to free herself and her parents and escape back to the human world. Miyazaki wrote the script after he decided the film would be based on his friend's ten-year-old daughter, who came to visit his house each summer. At the time, Miyazaki was developing two personal projects, but they were rejected. Production of Spirited Away began in 2000. During production, Miyazaki based the film's settings at a museum in Koganei, Tokyo. However,...
Read more on