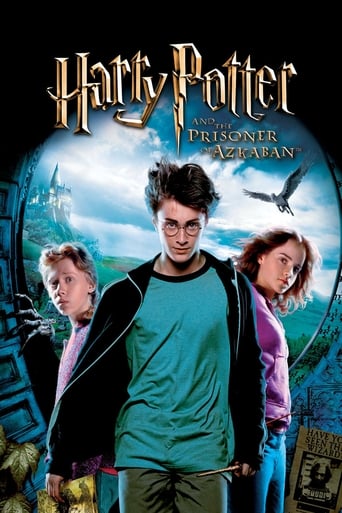 Yalini 3 years ago
as good as the book!

Aaron Jones over 3 years ago
best one of the series

Katy Eller over 4 years ago
This is the movie where the franchise starts to go from very good, to fantastic.

Anastasia Loule over 5 years ago
The director made it look different and it was awesome!

antoshka over 5 years ago
best picture of all the "harry potter" movies!

diane almost 6 years ago
Terrible adaptation of the book and the acting is not up to snuff.

Ashley Beacom 6 years ago
one of my favourites, excellent

Dominique Laurion almost 7 years ago
The movie that finally gave us what we wanted from a Harry Potter movie.

Robyn Hamilton 7 years ago
A very good adaptation but the palette a little too dark.

Daniel Jones 7 years ago
As I'm going through this series, this is the first one I've actually liked. More mature?

Rowan Humphreys over 7 years ago
really good watched 150 times!!
Harry Potter and the Prisoner of Azkaban is a 2004 fantasy film directed by Alfonso Cuarón and based on the novel of the same name by J. K. Rowling. It is the third instalment in the Harry Potter film series, written by Steve Kloves and produced by Chris Columbus, David Heyman and Mark Radcliffe. The story follows Harry Potter's third year at Hogwarts as he is informed that a prisoner named Sirius Black has escaped from Azkaban and wants to murder him. The film stars Daniel Radcliffe as Harry Potter, alongside Rupert Grint and Emma Watson as Harry's best friends Ron Weasley and Hermione Granger. It is the sequel to Harry Potter and the Chamber of Secrets and is followed by Harry Potter and the Goblet of Fire. The film was released on 31 May 2004 in the United Kingdom and on 4 June 2004 in North America, as the first Harry Potter film released into IMAX theatres and to be using IMAX Technology. It is also the last Harry Potter film to be released on VHS as well as the last film until...
Read more on