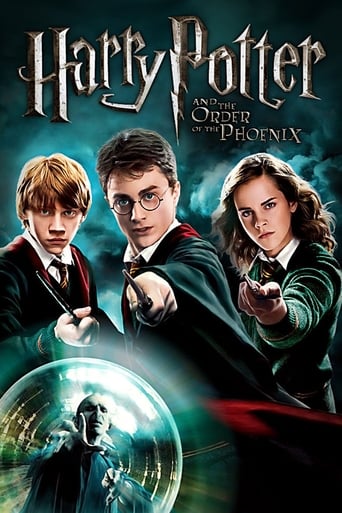 Aaron Jones over 3 years ago
or: "Moody Harry"

Amanda Mathews over 3 years ago
Didn't like the book, loved the movie. Amazing.

Phetcharat 4 years ago
Quite boring.

Katy Eller over 4 years ago
Ol' No-Nose is back at it again.

Jonathan Evans almost 5 years ago
arrgh why couldnt they get Alfonso Cuaron to do them all!

Alex Gifford over 5 years ago
Definitely not the best Harry Potter film due to time constraints cutting out material.

Ashley Beacom 6 years ago
By far my favourite, just outstanding acting. Far too much of Dolores Umbridge though!

Robyn Hamilton 7 years ago
Considering the 5th book was pretty crap this is a really decent movie!

Charlie Gleason 7 years ago
Reminds me why I love London.

georgie over 7 years ago
SO sad in parts, but completely breathtaking as always.

Matthew Tubbs over 7 years ago
The Worst Potter by the Best Director, still watchable a 100 times over

Alexandra Nt Lampost over 7 years ago
It just keeps on getting better and better.

Anthony Kozlowski 8 years ago
My 2nd favorite Potter movie. A prime example of trimming a book into a streamlined story.

Lino Monteiro 8 years ago
Unfortunately for Potter it felt too rushed which comes as no surprise. Still good though.

Dylan Clites 8 years ago
One of the weakest in the HP series. Mostly because this one mostly sets up the next few.

Cille Thystrup 8 years ago
An example of how much better the book was than the film. This book was my favorite.

Jenny Forsyth 6 months ago
Harry Potter and the Order of the Phoenix is a 2007 fantasy film directed by David Yates, written by Michael Goldenberg and based on the novel of the same name by J. K. Rowling. It is the fifth instalment in the Harry Potter film series, produced by David Heyman and David Barron. The story follows Harry Potter, a teen wizard in his fifth year at Hogwarts School of Witchcraft and Wizardry, as the Ministry of Magic refuses to believe the return of the Dark Lord Voldemort, and so appoints bureaucrat Dolores Umbridge as a teacher at the magical school. The film stars Daniel Radcliffe as Harry Potter, alongside Rupert Grint and Emma Watson as Harry's best friends Ron Weasley and Hermione Granger. The supporting cast features Ralph Fiennes, Michael Gambon, Imelda Staunton, Gary Oldman and Helena Bonham Carter. Live-action filming took place in England and Scotland for exterior locations and Leavesden Film Studios in Watford for interior locations from February to November 2006, with a one...
Read more on