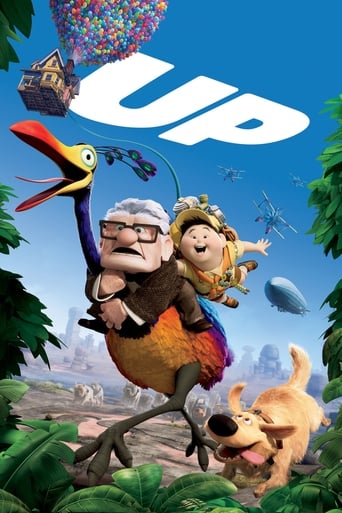 Eric Brainard over 1 year ago
This was an emotional animation. Art was fantastic but I suppose that's what Pixar does.

Jean Walton almost 3 years ago
The intro is probably Pixar's best moment..but the rest of the movie is just good. 3/4

Phetcharat over 4 years ago
Adventure is out there!

Nick over 4 years ago
Know what's more depressing that Up? That wasn't rhetorical, I'm genuinely curious.

Jesse Beatson 5 years ago
One thumb Up, one thumb down.

Leif Jacobson 5 years ago
A thrilling adventure and an extremely moving film. Wonderful.

Tony Gandía over 5 years ago
Fantastic accomplishment. Dazzles with heart and rousing adventure.

Jared Bennett over 5 years ago
Pixar yet again delivers!

Oisin F over 5 years ago
Charming, funny, touching and colourful. Pixar keeps on keeping on.

Laura Vastenavont over 6 years ago
i found it sweet how the little boy changes the grumpy, old mans life

Sasha over 6 years ago
Very few redeeming qualities to this. I am not a Pixar person, which I knew going in.

Joss Webber over 6 years ago
Makes me cry every time I watch it.

Francis Matthew Fagan over 6 years ago
A completely adorable film that will entertain the whole family including the adults.

Lino Monteiro over 6 years ago
Funny, imaginative, and emotionally satisfying, Up is a real family treat.

Justine D. over 6 years ago
Funny, sad, everything is whoa. Idk if I want 2 rewatch it, don't want 2 change my opinion
Up is a 2009 American computer-animated comedy-adventure film produced by Pixar, distributed by Walt Disney Pictures and presented in Disney Digital 3-D. The film premiered on May 29, 2009 in North America and opened the 2009 Cannes Film Festival, becoming the first animated and 3D film to do so. The film was director Pete Docter's second film, the first being 2001's Monsters, Inc., and features the voices of Edward Asner, Christopher Plummer, Bob Peterson, and Jordan Nagai. It is Pixar's tenth feature film and the studio's first to be presented in Disney Digital 3-D, and is accompanied in theaters and DVD releases by the short film Partly Cloudy. The film centers on an elderly widower named Carl Fredricksen and an earnest young Wilderness Explorer named Russell who fly to South America by floating in a house. The film has received universal critical acclaim, with a rating of 98% on Rotten Tomatoes (the best reviewed wide-released film of 2009 on the site), and grossed over $731...
Read more on